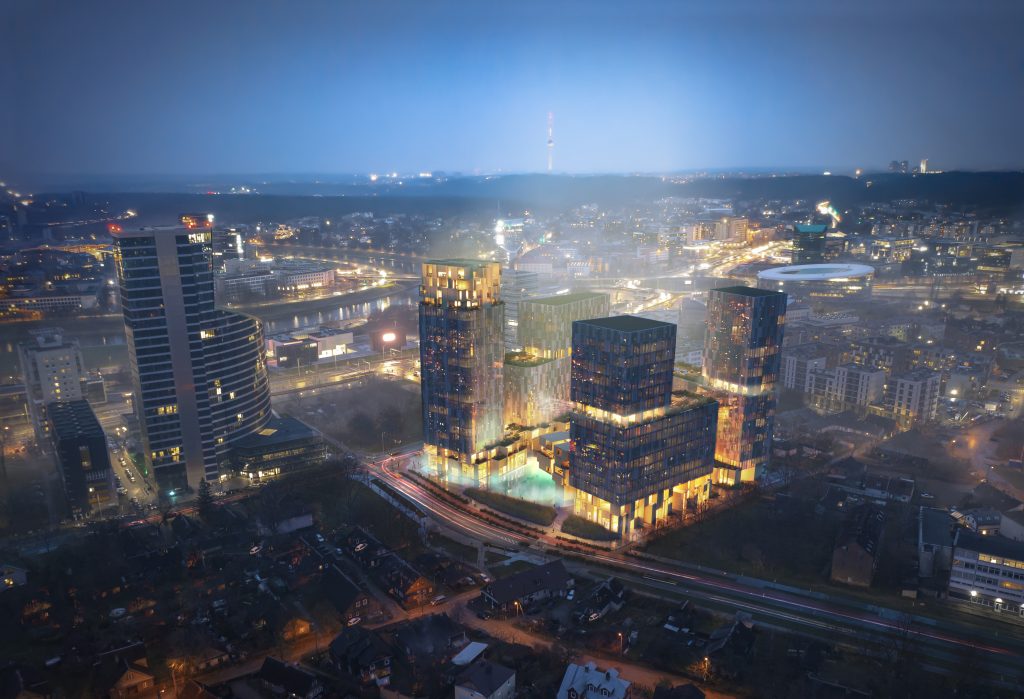 WINNER FOR THE RESIDENTIAL TOWER 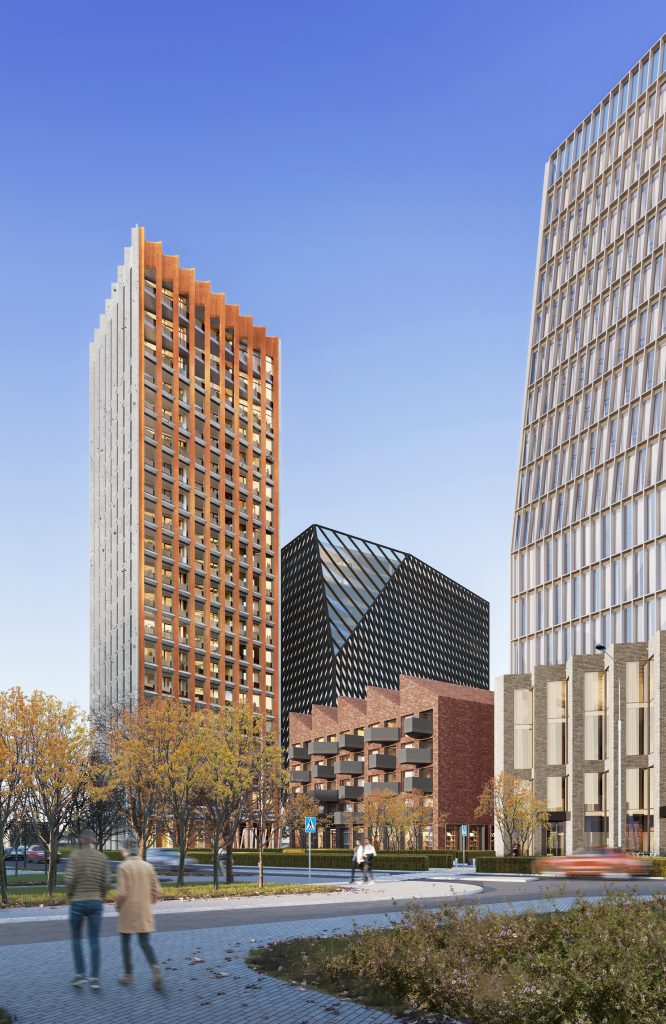 WINNER FOR THE MULTIFUNCTIONAL COMPLEX AND THE MASTERPLAN 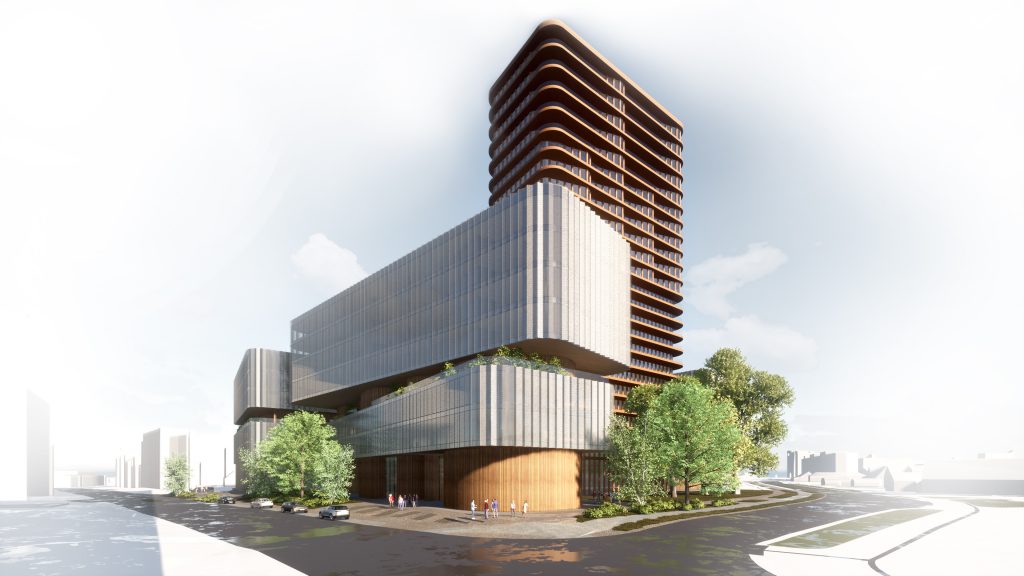 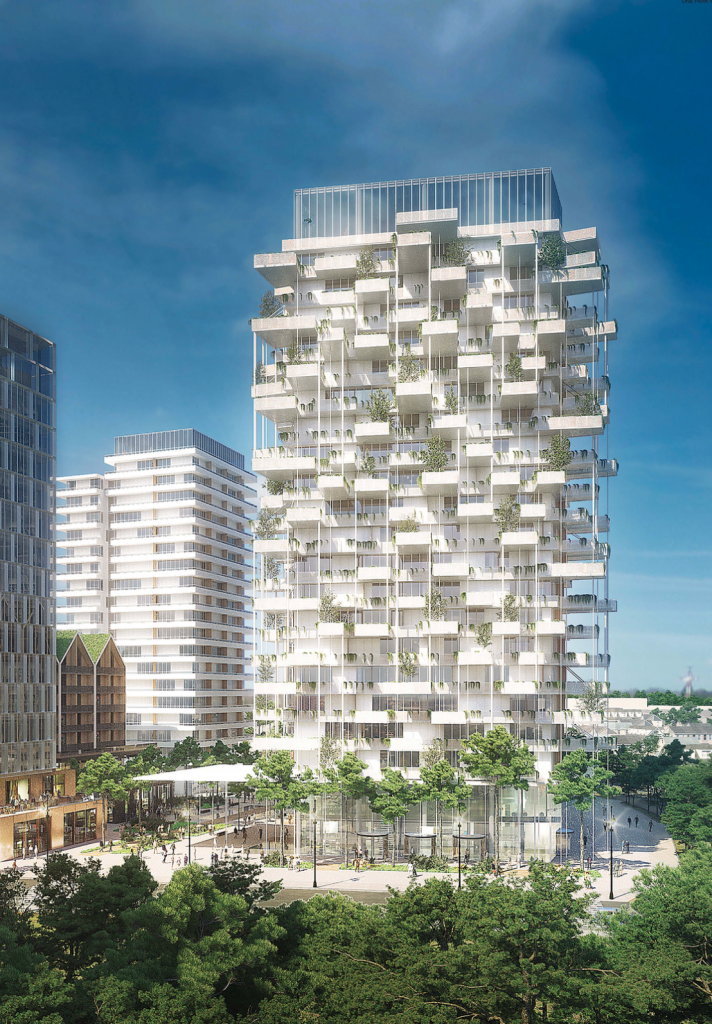 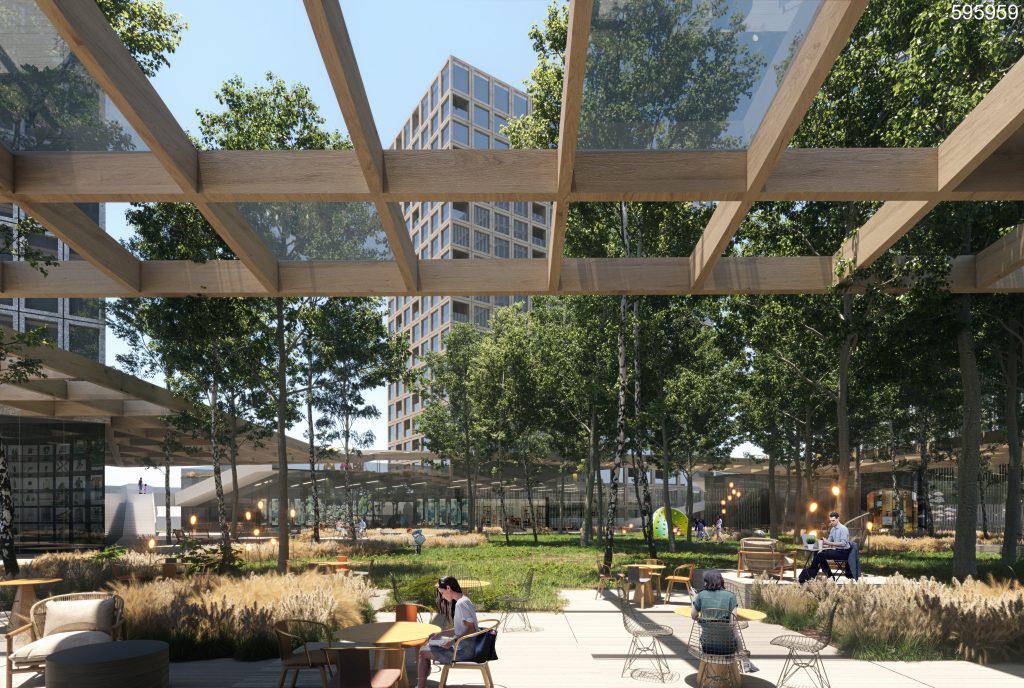 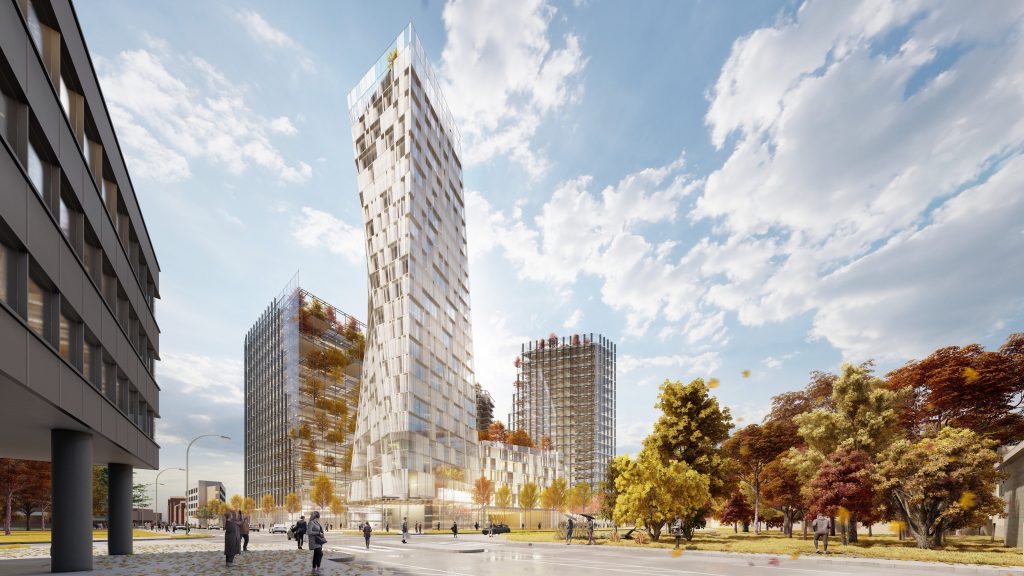 Scroll down for more

WINNER FOR THE TOWER: WATERMARK

The main idea is to reveal and interpret the local spirit (Genius Loci) of Šnipiškės in architectural language. The new architectural complex is a living organism that responds to the environment, its basic structural features, history, and future visions. The main task is to create the highest quality space for citizens of the city, to rehabilitate the phenomenon of urban life in high-rise buildings. This requires spatial diversity, proximity to services that meet all the needs of life, a high-quality natural environment, exceptional panoramas, the proximity of the working environment, a good connection to the main urban arteries and an assessment of the above-mentioned environmental features for architectural and urban integrity.

The essential elements of the environment that helped to form the solution are distinguished: the watermarks of the old riverbed, the scale of the building, the directions of the urban fabric, the history of the old brick works and the human scale.

Continuing the system of public spaces being developed in Šnipiškės, a courtyard space of maximum size open to all is being designed and marked by an exceptional body of water. It offers water activities in summer, ice skating in winter and meditation in autumn. It also works as a large light reflector to help fill the yard with cozy light. The buildings surrounding the courtyard have a dual volume structure: the common-use functions are composed of clay brick walls that hold the direction of the historic fabric, creating a humane, small scale, while the upper floors are made of solid, more reflective glass. As the visual symbol of the complex becomes a residential tower, the primary principle of volume separation allows to control the vertical composition: the central part of the tower is indivisible, “stylobate” and “crown” are formed from small-scale brick planes, while other high-rise buildings are divided into horizontal volumes. Such a composition of volumes allows to create a transition from concentrated vertical to small scale perimeter complexes in the nearby context. The residents and the employees of the complex have their own green recreation and sports areas set up on the terraces. Everyone has direct access to the water yard. Architectural solutions ensure the ability to observe the environment. The chosen structure allows for flexible changes in interior spaces, adapting them to changing living conditions.

WINNER FOR THE MULTIFUNCTIONAL COMPLEX AND THE MASTERPLAN: SUMMIT

This site hosts the possibility to develop one of the last empty spaces in the outskirts of Konstitucijos avenue as well as holding the missing keystone in the Right bank Architectural Hill, a concept offered in the ’60s and consistently followed by city planners and architects since.

This location is very complex, one might call it a ‘sudoku’ of urban design – the site marks many edges. It is a place where a high-rise area ends and a low-rise historical suburb of Šnipiškės begins. The site is one of the last places to build a high-rise building overlooking the best views Vilnius has to offer. It is also one of the last missing ingredients needed for Vilnius Central Business District (CBD), to become a lively place bustling with people, who work, live, come, eat, drink, relax, do business or spend their free time. The tangible size, scale, and ambition of the site and the buildings envisaged allow us to think of a unique opportunity to make a significant impact not only on the immediate context but also on the development of the CBD as a whole. Perhaps we have a unique opportunity to play the last chords in the development of the right bank of the Neris, after which this part of the city would become the best business district in the entire North Baltic region.

The volumes were designed understanding its influence on multiple panoramas – how the observer from the other side of the river will read this composition, how it will be perceived from the Old Town, and how it will affect the streets of Lvovo, Krokuvos or Kernavės, as the building will be visible descending to the center on Geležinio Vilko street.

Realizing the scope of this project, we deliberately sought to avoid architectural uniformity. We believe that in a project of this size, individual buildings must tell their stories, speak their architectural language, have their characters – in essence, repeat the success story of the cozy Vilnius Old Town, being that: warm spaces and different buildings, different languages, different architecture. We aim to follow the same principle in this area – a cozy, inclusive interior space in the quarter is the main axis, surrounded by different buildings for different people and different needs with a vibrating silhouette.

The urban-architectural idea of the project is to maintain a balance between the city and nature by linking its characters together thus creating a good-quality living and working environment. The concept could be simply described as a forest in a city, because a green square is designed in the center of a complex and is filled with forest plants, playgrounds, outdoor workplaces, and recreational zones for residents and office workers.

People who live and work in the city need a balance between the urban environment and nature. Working in an office is perceived as a space in an urban context, surrounded by a multifunctional “concrete” infrastructure that grows out of the network of streets and sidewalks, transportation, and the dynamics of the city’s population. In the meantime, the living space is recognized as an area of privacy away from the noise of the city and is associated with peace, cleanliness, and relaxation.

Spending much of their time outdoors in a city, residents need a connection to the natural environment and ecology. The core of the complex is a public square in the center with forest vegetation, covered with a wooden glazed pergola. This main square connects all buildings with different programs and is a place for rest, events, outdoor cafes, and restaurants. From a vertical point of view, the pergola divides the building complex into two levels. One – public space, a square, another – working and living private space. The pergola then acts like rain and sound barrier.

The complex is divided into four parts to make buildings thinner and do not dissonate with the existing context. Those four vertical elements are located asymmetrically in a chess-like order to make the complex view multilayered when observing from the city center. The heights of the buildings gradually decrease from east to west and compositionally complement the curve of the urban hill of the right bank of the Neris River.

Our proposal aims to set a new standard for sustainable high-rise mixed-use developments, offering a vibrant mix of publicly accessible uses on the lower levels around attractive public spaces, and high-quality office and residential space for a range of tenants on the levels above, designed to maximise access to light and views.

The scheme’s ambitions extended well beyond the immediate site boundaries, aiming to bridge between two urban development centres and creating a new pedestrian-focused heart for the Šnipiškės neighbourhood. Despite its size and eye-catching high-rise buildings, the project’s focus is very much about the human scale, the interaction between people and buildings, and the activation of the public realm within and around the physical site.

The project aims to serve as both a local centre and place of gathering, for residents, office workers and neighbours, and – through its distinctive architecture, commercial offer and high-quality spaces – establish itself as a destination in itself in Vilnius.

The scheme takes the form of five separate buildings, of which four are towers whose distinctive silhouettes take up their place in the Vilnius skyline, respecting the heights dictated by the “urban mountain” regulation line. They define an urban space conceived as a place of gathering at the heart of the new community. The space is shaped to form connections to the surroundings, reinforcing pedestrian flows in all directions.

Each building adopts a particular form, shaped to suit both building programme and siting, responding to views and sunlight. Despite the height of the development, solar access is ensured both within and around the site.
Environmental sustainability informs all aspects of the concept, from the urban scale to detailed planning and landscaping. Lvovo#59 represents a huge opportunity to lead the way for large-scale carbon neutral urban developments.

In our Masterplan design we have aimed to create a unique and relaxing natural environment that takes full advantage of the sites location and potential. Looking at the microclimate and allowing deep penetration of sun inside the project. Each building is composed of two elements. A base containing a series of leisure functions and the office lobbies to the efficient office or residential volumes above. The idea is to create a relaxing and unique environment for the project at eye level. A place where you want to go and stay even if you do not work here.

IDENTITY: Our eyelevel approach to urban planning is to create an urban experience at a human scale that will create a great environment. At the heart of our urban approach is to create the sense of space and to concentrate the activities around one central urban spaces. All buildings are facing that inner space and that urban space is facing South and the views to the city. Clear sightlines are opening up the arrival views towards the River, and the arrange- ment of the volumes is creating depth and openings to draw you inside and to discover the project. From the back of the project you are not behind a row of vol- umes but have distant views also.

Lvovo 59 is located in the second row of the urban hill of Vilnius city, starting from Konstitucijos Prospektas. After the completion of the development of Konstitucijos Prospektas, the project site may not be clearly visible in the main city skylines. Therefore, we believe that in this unintentionally chaotic situation of the urban hill, priority should be given to one bigger, more expressed volume, but not to several leaner towers, which would only increase chaos of the hill and would not allow to easily identify dominance of the designed quarter.

In order to ensure the uniqueness of the quarter, we unequivocally propose to create a seamless aesthetic for the quarter, integrating both the main tower and the lower buildings. This aesthetic and functional orientation would ensure that the Lvovo 59 quarter does not disappear in the development of other adjacent complexes.

The concept of an aesthetically coherent urban complex is created, combining all its buildings into a common organic soft fabric, from which the dominant feature emerges – a tower of quiet, solid architecture, complementing the curve of Vilnius’ urban hill.

The corner building of the future quarter should be not a tower, but smaller-scale commercial buildings, which are like a trap to attract pedestrians into the inner courtyard.

The ground floor is composed of curved volumes of organic shapes around the perimeter of the complex, where commercial, retail and service spaces are designed. These organic shapes make it equally interesting from the outside of the quarter as from the inside. The main volumes, which are rectangular in shape, soften the scale of the quarter and allow for a unified aesthetic.